We thank our neighbors at the MAC!

The MAC extends an invitation to our Browne’s Addition neighbors.  You can temporarily park your car on levels 2 and 3 of our parking garage on Tuesday and Wednesday when the City plows Browne’s Addition streets.  Please do not park on the top level because we will be doing snow removal there.  Please remove your cars by Thursday, December 2nd, we need parking spaces for museum visitors.  Thank you.

Plowing this week! From Marlene at the city

Tell a friend!  It's in everybody's best interests that we get the streets cleared of cars for the Big Plows.

Doug and Jonathan,
We are scheduled for Browne’s Addition plowing on Tuesday and Wednesday.  We’ll do north-south streets on Tuesday and east-west streets on Wednesday.  Cars will need to be moved to accommodate the plows or they will be towed.
I will send out the information to the media in the next few minutes.  We’ll post to the web, tweet, email out to everyone who has an email on file with us, and add to Metroguide on CityCable 5, etc.
Of course, whatever you can do on your ends will be very helpful, too.
Thanks much!
Marlene
Posted by Browne's Addition Neighborhood Council at 10:41 AM

Rick and Julie Biggerstaff are opening their home to our annual Holiday Party/Gathering this Wednesday.  We thank them for their graciousness.

2315 W First (across from the Campbell House)

We will take care of business from 6:30 to 7:00, then uncork the festivities.

Bring something to drink and an appetizer or dessert to share and plan for fun!

See  you there..
Posted by Browne's Addition Neighborhood Council at 12:22 PM

Also, Marlene says that the tentative plan is to plow Browne's Addition Tues and Wed next week...North-South one day, East-West the other.  This is NOT definite, so stay in touch.

Hi all,
I've updated our release from this morning.  We will start in residential plow routes 22, 23, and 24 at about noon.  These areas typically don't have a lot of people who park on the street so the plows shouldn't have trouble.  Check out the map at http://www.spokanestreetdepartment.org/documents/snowroutemap.pdf to see the route numbers.  We should have 40 pieces of equipment out on the streets by around noon, including plows, graders, and de-icers.

Also, Street Department officials are reminding people not to blow or shovel snow into the street.  Please shovel or blow your snow into your yards.  That helps minimize the snow that the plows will push onto sidewalks or the end of driveways.

Thanks to all for your help in getting the word out.

Find out more information on the City of Spokane at www.spokanecity.org.
FOR IMMEDIATE RELEASE
November 15, 2010
Contact:        Marlene Feist
Public Affairs Officer
(509) 625-6740
**********************************************
GET OUT YOUR SHOVELS; SNOW SEASON BEGINS
Mayor Verner says City is prepared; encourages residents to do the same
**********************************************
With lots of predictions for higher-than-normal snowfall this winter, the City of Spokane is officially marking the start of snow season.  The City has been preparing for snow and is encouraging citizens to take steps to prepare as well.
“Snow is a fact of life in the Inland Northwest, so we must be proactive in our winter preparations and our approach to snow removal,” says Mayor Mary Verner.  “Today, we’re taking an opportunity to remind people of our snow removal plan and what we all can do to make winter weather more manageable.”
The City’s snow removal plan is designed to improve safety for motorists and pedestrians, ensure emergency responders can reach citizens, and enhance movement for pedestrians, motorists and economic activity.
The City revised its snow removal plan last year, following two years of heavy snow accumulation, and committed to enhancing snow removal efforts, stepping up sidewalk snow removal around City-owned property, and enhancing communications efforts with citizens.  Citizens and business owners, meanwhile, are asked to follow parking restrictions and keep sidewalks, vehicles, hydrants, and storm drains clear of snow.
Details of the snow removal plan, along with a map of residential snow plow routes, will be available in the Nov. 18 Inlander and Spokesman-Review Voice sections.  In addition, this information has been sent out in the City’s November utility bills and is available on-line atwww.spokanecity.org.
Under the plan, the City defines the snow season as Nov. 15 to March 15.  During this time, the City may declare a snow emergen-cy when weather conditions warrant.
-more-
Snow plan
Page 2
A Stage 1 Snow Emergency is declared when 2 inches of snow are on the ground and 4 more are anticipated during the current snow event; a Stage 2 Snow Emergency is declared when 6 inches of snow are on the ground and more is anticipated in the current snow event.
A Stage 1 Snow Emergency will require citizens to move parked cars off of all arterials and STA fixed bus routes, while a Stage 2 Snow Emergency will require citizens to park on one side of the street in residential areas.  This year, citizens will be asked to park on the side of the street with even number addresses.  The parking changes will allow plow drivers to open up streets better, allowing for easier and safer travel during heavy snows.  The City expects to issue warnings to those who are parked incorrectly.
Removing snow from sidewalks within 24 hours of a snow storm also is critical.  A committee of citizens, local school representatives, Spokane Transit Authority representatives, and City employees looked at an enhanced approach to sidewalk snow removal that would eventually require tickets for those who failed to comply.  This year, the City is asking for voluntary compliance.
In addition to revising our snow removal plan, the City has made additional preparations for winter weather in recent weeks, including:
The City also would like to encourage residents to consider what they need to do to get ready for winter in the Inland Northwest.  Among other things, residents should:
-30-
Posted by Browne's Addition Neighborhood Council at 7:11 PM 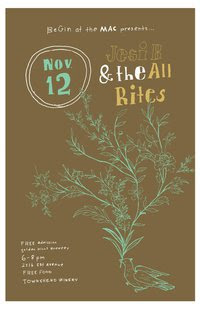 The second Friday of the month is coming up; so that means its time for another BeGin!

The fun starts at 6pm and lasts till 8pm at the MAC. The music act this time is Jesi B. and the All Rites. They are an original psychedelic blues funk band from Coeur d'Alene.

Admission is free. See you there! RSVP on Facebook

We promise NO political ads at our monthly gathering of the Brownes' Addition Neighborhood Council and Steering Committee this Wednesday, Nov 3, from 6:30 to 8:00 pm at the Museum of Arts and Culture (the MAC).