MEDIA CONTACT:  Marlene Feist, Utilities Communications Manager, (509) 625-6505
Ready for spring yard cleanup or at least spring? The City of Spokane is trying to urge Mother Nature along as it resumes curbside yard and food waste pickup on Monday, March 3.
The optional City service runs from March through November. The 96-gallon green yard waste cart can be filled with all manner of yard waste—grass, leaves, pine needles, pine cones, weeds, vines, thatch, plant trimmings, and branches. Customers can even cut up and throw in the old Christmas tree that’s been parked along the side of the house for weeks.
Customers also can dispose of food scraps and food-soiled paper in the carts. Acceptable scraps include meat, poultry, fish, beans, dairy products, fruit, vegetables, breads, grains, pasta, eggshells, nutshells, coffee grounds, tea bags, and leftovers. Acceptable food-soiled papers include greasy pizza boxes, coffee filters, paper towels, paper napkins, uncoated paper plates and cups, paper egg and berry cartons, and paper grocery bags with food scraps.
Customers put their yard and food waste carts out the same day they haul their garbage and curbside recycling carts to the curb. The material is composted at a local facility.
The cost of the service is $14.57 a month, with no charge when the service is suspended for winter. City of Spokane Solid Waste Management customers can add the service by calling the yard waste hotline at 625-7965. 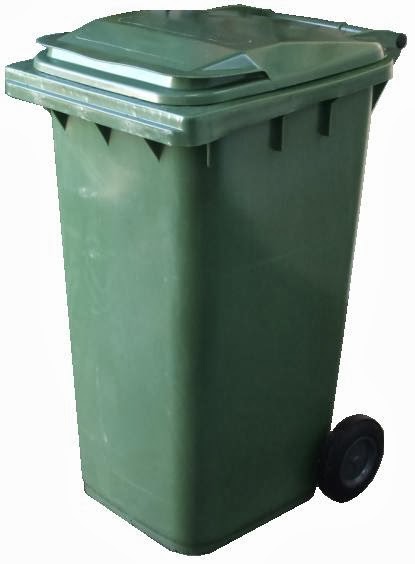 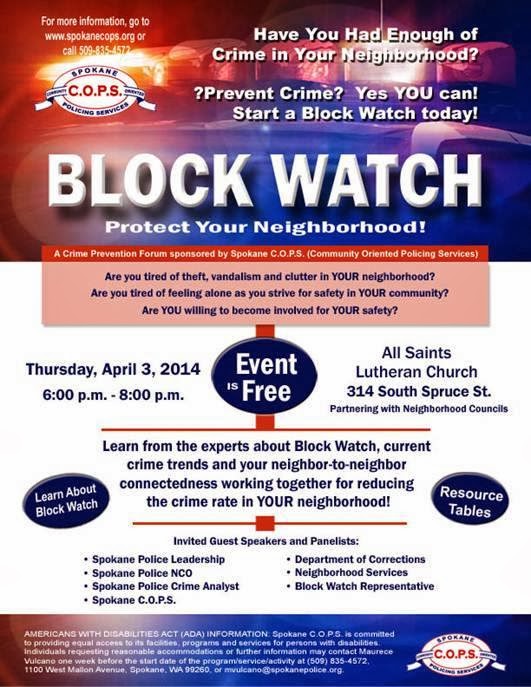 Drivers coming to downtown Spokane won’t need to plug parking meters today because of the Presidents Day holiday.Garbage and curbside recycling will be on regular pickup schedules this week.Riverfront Park and city libraries will be open. Municipal court clerks will be at their desks and available by phone, but the Public Safety Building will be closed to the public.

Transit buses may be unusually full since Spokane Transit Authority is operating on a holiday schedule today.For example, the Division Street bus No. 25 runs every 15 minutes on weekdays and Saturdays but will be running every 30 minutes, with its last departure from the Plaza downtown at 7:50 p.m. 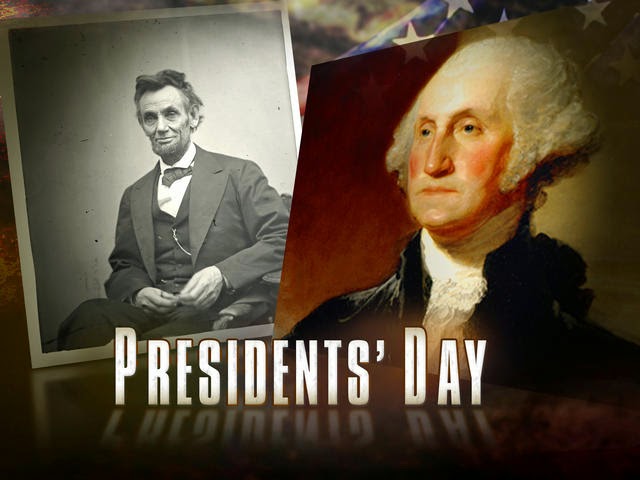 Posted by Browne's Addition Neighborhood Council at 3:35 AM

The Friends of Coeur d'Alene Park has presented a summary document describing the planning that Browne's Addition Neighborhood would like to accomplish with allocated CDBG funds. 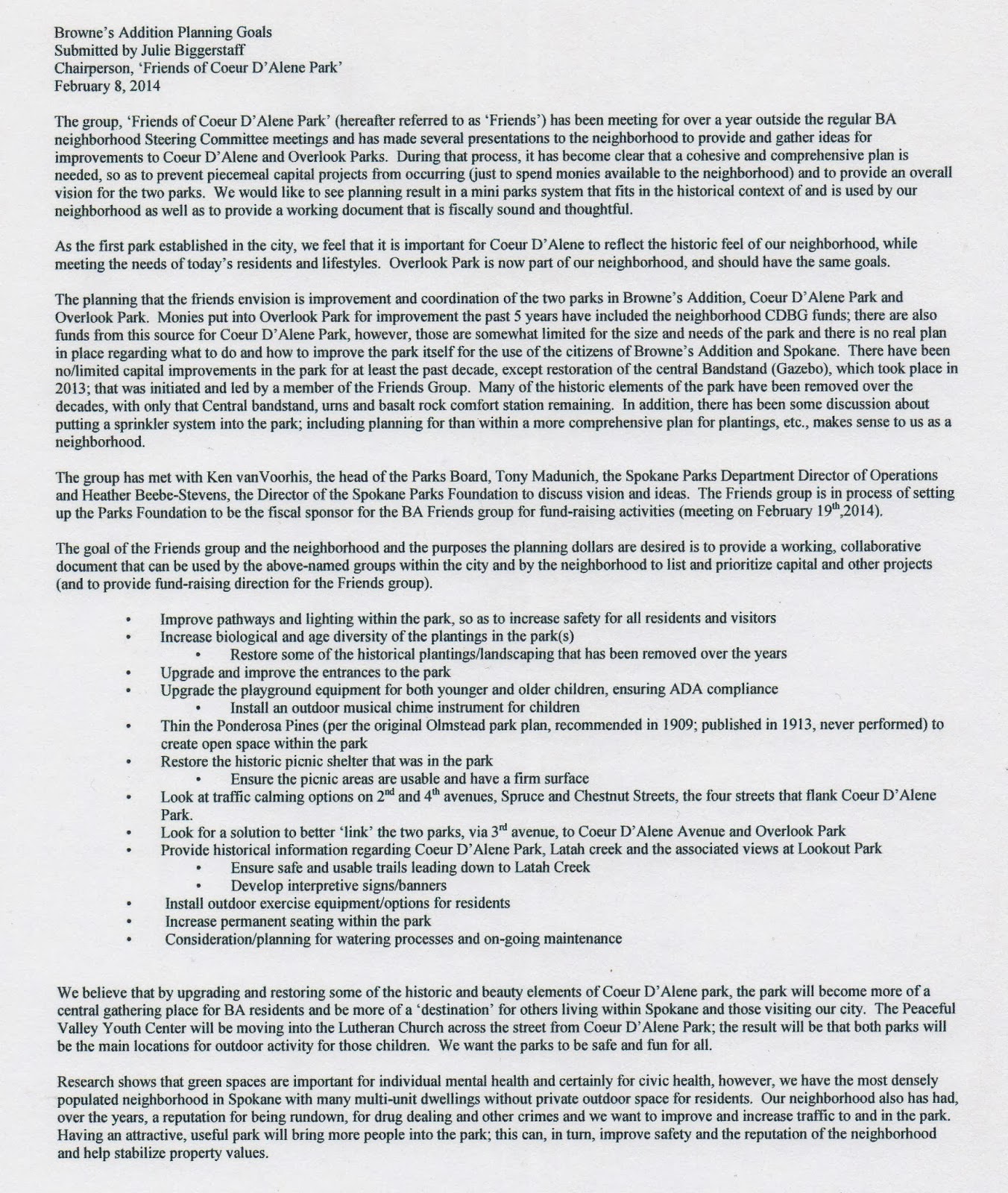 Neighbors, At our General Meeting this past Wednesday evening, we had Bob Turner from the City of Spokane speak about a proposal to make changes to the way we handle traffic flow through our neighborhood. Because of an oversight on my part, Bob was not able to present a PowerPoint Slideshow that he had prepared to support his talk. Mr. Turner was nice enough to make that available to me so that I can forward that on to our neighbors via email. Anyone wishing a copy of that presentation, please let me know, along with your email address, and I'll see that you get a copy.

New threshold will be 24 degrees effective today
Release Date: 2/5/2014 2:00:00 PM
MEDIA CONTACT: Brian Coddington, Communications Director, 509.625.6740
The threshold at which the City will activate designated warming centers increased to 24 degrees effective today.
Councilmember Mike Allen made the suggestion, which could as much as double the nights the warming centers are open, and Steve Salvatori covered the cost by transferring $15,000 from his unfilled legislative aid budget. The City’s Community, Housing and Human Services department, which oversees the warming centers program, worked quickly with its partners at the request of Mayor David Condon to implement the new guidelines.
“The increase in temperature might seem modest, but we expect it will have a significant impact on our ability to bring people out of the cold during periods of extreme weather,” Salvatori said. “As we work to put our best foot forward as a community, it is important to show compassion through increases in funding that help those that are most vulnerable on a freezing night.”
Warming centers, which are not set up for lodging, are activated during periods of extreme cold weather at the request of the City from Nov. 1 through Feb. 28. Volunteers of America Hope House serves single women and The Salvation Army serves single men, families with children and couples without children. The Volunteers of America Crosswalk serves as an on-call warming center for youth. The sites are available in addition to regular homeless shelters located throughout the City, allowing more people to get out of the cold.
Posted by Browne's Addition Neighborhood Council at 5:16 PM

Email ThisBlogThis!Share to TwitterShare to FacebookShare to Pinterest
Remember to join us tonight for the General Meeting of your Neighborhood Council. We start at 6:30 and we will be gone by 8 or sooner!
Posted by Browne's Addition Neighborhood Council at 5:13 PM